I did it. I finally did it.

Last week I handed in my notice, I am leaving the wonderous world of work for a while, as of April 17.

Phil has got a work transfer over to mid-wales, so we're also going to be moving, probably some time near the end of May.
I'm hoping to get my PPL finished or at least close to before we move, otherwise I will be heading back over and staying with my Mum a fair bit until I finally qualify as a pilot.

My plans? A few months of not even considering working, but solely focussing on getting fit for a trip to the Alps in July (oh yes, bring it on!) and simply going climbing!

This blog is especially for Patrick - after a hard fought discussion about the best knot to abseil on (and after a mini tantrum where my overhand knot was snatched away from me and converted into a double fisherman's by said partner who was impersonating a very wussy little girl at this point).
Posted by Lauren at 02:38 3 comments:

"What about that path over there?"
"I don't think so - look, it goes the other side of the river."
"It looks like it goes round to the right."
"Well we could try it, but it would be a very brave move - we could end up walking quite a way along it and then having to walk all the way back again."
"So you think we should go up here, in these footprints?"
"Yeah, they're going the right way."
"Ok, fine. I do think that wide, well trodden path looks like the one though. But, you have been here before so I trust you."

This discussion heralded the beginning of an epic journey, an adventure into the unknown. We were following the forlorn footsteps of a past stranger, choosing a course that would require us to overcome many hurdles - but not one of them would prove great enough to destroy our resolve and our mental fortitude.

"Are you sure this is the right way?"
"I can see a set of tracks cutting across to the base of the route just up ahead."
"Hmm."

Flailing and desperate, fighting to keep our heads above the fluid powder, we battled on, each step slowly draining the energy from our bodies as we dug deep and marched onwards. Gritty and determined, our eyes found focus on where our minds were carrying us.

Instinctively I knew the tremble in my partner's voice could only mean one thing...

Patrick and I had set out to climb a route called 'E Tutto Relativo'. The line was undeniably beautiful - we had seen it from the road. I was also told that the walk in would be easy and
wouldn't take long - a pre-requisite as we had set out late (due to my own tiredness). This route was one that Patrick had been on before, but hadn't completed - a case of 'unfinished business' I guess you could say. And it did look beautiful.

Sadly though, things were not to go to plan that day. The first inkling I'd had of things not being
quite right, occurred when we decided to follow a set of footprints through deep powder, rather than the 'motorway' of a path we had been on initially.

45 minutes of slogging through waist deep powder only served to reveal that I had been right all along when we re-joined the main path! As you can probably imagine, I wasn't too happy.

Things hadn't been all bad though - I'd spent 45 minutes in absolute hysterics watching my beloved partner falling over repeatedly.

The next stage of the plan's collapse occurred when we finally got a good view of the route and both decided we didn't really fancy it after all (I do think we made the correct decision though - neither of us felt confident and the conditions on the line were somewhat questionable and it is, after all, better to be safe than sorry...)

So the plan evolved, and we walked back round the way we had come (on the path this time), to another nice looking route.

It became obvious that climbing simply wasn't going to happen when: a French guide with his student, who had been sat around at the base of the climb chatting the whole time we were walking up, decided to deliberately cut in front of us and take over the route. By the time he was finishing the route was in the sun and running with water - we walked away, peeved and frustrated, but still happy to have been in the mountains.
Posted by Lauren at 05:20 No comments:

This week has been hectic. I spend a week away and what happens? One of our senior managers is sacked, the other is shifted from managing back to engineering and we're suddenly reporting to one of the company directors. Honestly, I'm not all that sure what my job really is anymore. Mind you, it doesn't seem to let up any - I spent 2 days travelling back and forth to Nottingham (managing a build) then drove a land rover to Plymouth and back in a day for some testing (wednesday consisted of approx. 10 hours driving, 4 hours working, several minutes wishing I did something else for a living and a few seconds asleep at the wheel...), and have just finished the week with a day of chasing around Coventry, wasting several hourstrying to access a computer system with the wrong passwords...

Anyway, on a more positive and interesting note, last Wednesday I flew out to Milan to meet up with Patrick, with whom I was going Ice Climbing in Cogne - a valley area in the Italian Alps.

This was a trip I had suggested whilst sitting in a cafe in Scotland after having spent days slogging through waist deep snow and not actually managing to climb anything - I needed some proper climbing! Expensive flights were booked, hotels and hire cars arranged and the next thing I knew Patrick and I were travelling into the mountains.

Wednesday was spent travelling, so on Thursday we headed out to climb the classic 'Cascade de Lillaz'. I didn't actually expect to be thrust straight into leading, bearing in mind my actual ice climbing experience at that point had been limited to seconding a single 10m ice pitch on Aladdin's Mirror Direct in the Northern Corries, and a session at the Ice Factor.
I hadn't even placed an ice screw before. Mercifully I was feeling reasonably confident, and once I'd watched the team ahead climb the first pitch, and had an encouraging chat with Patrick including a basic ice screw briefing), off we went. 4 beautiful ice fall pitches, and one slushy snow horror later and we were on our way back down and heading to the bar for a hot chocolate - Italian styleeee (if you've never tried proper Italian hot chocolate, you really, REALLY should).

I don't really know quite how to convey how incredible it felt to have led all 5 pitches of such fantastic ice, in such gorgeous surroundings and weather and with such a brilliant partner (more on that in a later post). So basically, I won't even try to say anything more eloquent than 'wow'. 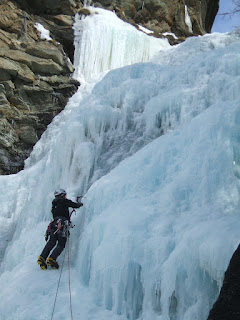 Having had a fantastic day on Thursday, Friday was looking promising, that was until my stomach decided that it wanted to transform itself from a useful and well-loved body part to the demonic pain generator from hell.

Despite the horrendous cramps and sickness we walked in to a climb called 'Patri de Gauche'. Patrick led the second pitch via the most vertical section of ice I've ever seen - I got myself into a right state seconding it (I could try to justify my poor performance but I think it was simply a matter of being inexperienced and feeble, lacking technique - I have nothing but admiration for the way P led that thing in such a cool, calm and collected manner.) 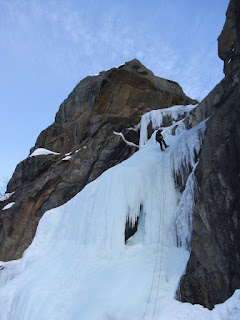 Not feeling particulary brilliant my choice was to bail off the route after this pitch (yes, I was being phenomenally wimpish), so we did. One abseil and alot of faffing later we meandered back down to the beginning of what turned out to be the first pitch, a much easier angled affair involving a rather funky ice cave at the top. This pitch was to be my lead if I felt up to it - needless to say I had to have a crack at it and a little while later I was sat at the most wonderful belay in the world - a position akin to a nice comfy armchair atop a frozen waterfall with an alpine view, in the sun. Awesome.

Sadly this was to be the end of our actual climbing, due to a number of factors including faffing and incompetance, but mainly weather conditions.

It would have been nice to have gotten more done but all in all it was a great trip, with some great climbing and more laughter than is necessarily healthy (await another blog entry - the comedy is worth a written piece of its own!)
Posted by Lauren at 00:08 No comments: