Life is not good at the moment.
My knee is still gipping me a little but to be honest it's not bad enough for me to really worry, it's good enough to let me train at the wall and for this I am grateful. Unfortunately, right now this seems to be the one small thing I have to be happy about.

Work. Again. It's rubbish.
This week I spent Monday and Tuesday on an absolute horror job in Vienna. I'm genuinely not sure how we managed to walk away from that one without the customer skinning us alive...at least I wasn't alone for once (I usually take these beatings solo, so having another colleague there did make it much more bearable, even hilarious at times - if you didn't laugh about it you'd end up in tearful hysterics and in the local hospital...)
Wednesday Scott and I were going to go to the Peak District for some well needed therapy but the weather was sh*te. Bum.
Thursday and Friday I spent in Stockholm with some other colleagues - this time I wasn't seeing a customer but on a training course to enable me to work on the Stockholm Metro system. Slightly surreal having to take exams in Swedish when you haven't a clue how to even pronounce half the words...
Actually the Stockholm trip was quite nice, no pressure and we managed to get into the Old City for dinner in the evening (Elk Fillet steak is probably the nicest thing I have ever eaten).
Tomorrow I fly out to Larnaca (Cyprus), not to return until Tuesday. Yet another crappy job to be carried out solo. Great. Right now, I am feeling desperately nervous and panicky and just don't want to go - all this travelling and working alone really stresses me out, I hate it.

So this week - Austria, Sweden and Cyprus. No time for myself at all. It may sound glamorous, all this jet-setting, but believe me it's not. I would gladly swap it for a job cleaning out the crud from the gutters in Luton right now.

Oh, and just to top it all off, the selfish chav whose car I ran into last August has decided to raise a personal injuries claim against me.
So now I have a claim against me for damages of £1500 - £3000, because the precious little poppet apparently got whiplash. Compete bullsh*t. The list of my 'Negligences' has seriously wound me up, the lying beyatch.

So yeah, I'm loving life right now.
Posted by Lauren at 14:46 No comments:

start of my winter season

It's been a little while since I last posted, for which I apologise. I guess I've just had other things on my mind.

Anyway, Phil and I went up to Scotland for a few days over new year - we had a really nice time actually. We managed to chill out for a couple of days in Dundee, and I went climbing in the Cairngorms with a nice chap called Rich.

Friday was the first day out and we went into Coire an t'Sneachda (easiest to get to, shorted walk in and thus the biggest queues for routes - the conditions that day were about as perfect as it is possible to get! Brilliant clear blue skies, no wind, good snow and ice - perfect!)
Anyway, we went and climbed the route 'Aladdin's Mirror Direct', IV, 4. Most of the route is easy grade I snow plodding, which we didn't even bother protecting. The central section is a much harder proposition however - a grade IV ice pitch. Awesome!

Now I must point out that I have never actually climbed pure ice like that before, and I've also never set foot on a route harder than a grade II/III...

Needless to say Rich led it with consummate ease (even after we had spent what must have been close to an hour waiting for the pair on the route before us to get off - honestly, I was frozen). I, however, found it absolutely terrifying and desperate. Felt amazing once I'd done it though and I guess the skills needed to climb ice are ones that I will gain with practice, so all is good really.

I LOVE WINTER CLIMBING, so much. Honestly it is just such an amazing feeling being out in the mountains like that. Awesome!

Sadly though, my second day out didn't go so well.
We were heading for Hell's Lum to climb a grade II pure ice route called the 'Escalator'. It looked amazing and so beautiful. Unfortunately I managed to catch my foot on a boulder during the walk in and twisted my knee. Stupidly I thought it would be ok and just carried on. An hour later, on the top of the Cairngorm plateau and walking down into Hell's Lum I was in absolute agony - we had to turn back.
I cannnot even begin to describe how painful the trek back was. Walking uphill didn't seem too bad but the walk out was almost entirely downhill, including a downclimb of the goat track (think really really steep hard snow). I'm not sure how long it took us to get back to the car park but I would guess it may have been approaching 2 hours. 2 hours of feeling like at every step someone was shooting a staple into the underside of my kneecap - every step (I'm not exaggerating, I was actually in tears with the pain).

I'm gutted that I didn't get to climb the route, but to be honest that really doesn't matter - I can always go back. Right now I'm just worried about my knee. The damage was done on Saturday, it's now Monday and it is just as painful as it was when I did it. Things do not look good... 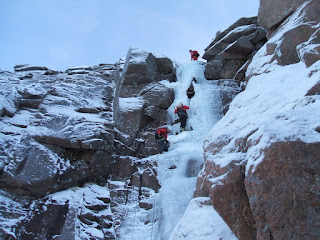 Rich and the pair before us on the steep ice pitch of Aladdin's Mirror Direct (I took the photo whilst belaying).
Posted by Lauren at 13:20 No comments: