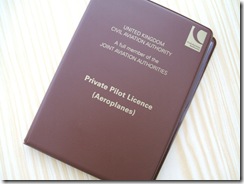 my massively and unfairly prejudiced and bigoted rant about SPA holders

Disclaimer: these words represent the views of myself, me and I alone. No-one else has been involved (directly). These views may vary depending on the mood I’m in and how much chocolate or ice cream I have consumed. This is not a serious piece of writing intended to hurt or belittle, merely a sarcastic and humorous conveyance of some of the stereotypical qualities of the SPA holding climber that either amuse or irritate me. Please do not be offended if any of what you are about to read applies to you (unless you’re the insensitive b*stard who seemed to think I needed to be “hoisted” out of Wen Zawn on Sunday, in which case feel free to take offence).

The SPA – Single Pitch Award: The SPA is the qualification that allows the otherwise average (or often below average) rock climber to assume an air of superiority over their (often technically superior) brethren. All the award actually means is that the holder can charge money to enthusiastic yet naive punters who think that the best way to get into rock climbing is to fork out their hard earned cash to someone often barely capable of climbing the stairs (let alone a serious rock route - the minimum requirement to gain the award is an ability to lead routes graded up to Severe, nothing more). The SPA holder will then be able to shepherd their clients to a popular single pitch crag (usually Stanage) where they will set up top ropes on a number of 3 star super classic routes (it should be noted that they can only supervise one climber at a time, but it’s usually much easier to have a number of routes reserved and readied). Other climbers will watch on in awe – muttering amongst themselves about how “incredible it is” that these beginners in trainers are actually scrabbling up said classics…

SPA requirements: In order to gain an SPA, the applicant should be:
It appears that it’s not necessarily essential to possess all of the above qualities prior to commencing the training for the SPA, but they are necessary if the holder is to retain any of the value of the award over time. It should also be noted that the listed qualities need to be actively cultivated through regular use at the crag, the indoor wall and even the pub, especially those qualities requiring the application of the ‘air of condescension’ and the elimination of tact.
Posted by Lauren at 21:49 1 comment:

Saturday: Tiger Moth Charity event at Halton (actually it was both Saturday and Sunday, but seeing as we no longer live opposite the hangars we only went for Saturday afternoon).

A truly glorious afternoon of free flying fun. Firstly, we had the Queen’s Birthday flypast to look forward to – I’m not sure who it is that manages to get them to fly over us but whoever it is deserves a pint! Not only did we get the full flypast of jets (Typhoons, Tornados (all variants), VC-10 re-fueller – trailing its drogues, Nimrod, and a few others), but the Red Arrows actually dropped smoke for us! (see pic) 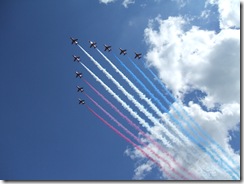 The BBMF contingent of the Lancaster, a Spitfire and a Hurricane in formation was too slow to reach us still in its allocated slot, so they came afterwards and did three circuits for us! Awesome.

Next we were treated to some truly stomach churning aerobatics by one of Britain’s best aerobatic pilots in a 40 year old (and absolutely gorgeous) Pitts Special, then an aerobatics display in one of the Tiger Moths (like, wow).

Amongst it all we also watched the ‘Flying Circus’ doing its thing – limbo, balloon popping etc – this is always a stunning event to witness, seeing an assortment of vintage aeroplanes flying under what are essentially washing lines being held by some seriously brave marshallers, then watching them try to pop helium balloons with their propellers (which, incidentally is no-where near as easy as it sounds).

Then the stars of the show – the ‘Cricket Team’ – a formation of eleven, yes eleven, tiger moths doing their display formation. At least we thought these were to be the stars of the show until they all stopped on the runway threshold while our ‘special guest’ came over from Brize Norton to do a flypast for us…

Now, a few of us had been speculating over what the ‘special guest’ was going to be – none of us really believed what we were about to witness…

The Vulcan. Piloted by none other than Falklands hero Martin Withers.

I have been wanting to see this aeroplane fly ever since Paul took me to sit in one up near Coventry somewhere, and what a machine she is. Low level. Fast. Incredibly loud (she set off quite a few car alarms). Stunning.

Made my day that did. I just wish I’d been able to take some better pictures – when he turned her on her tail at the end of the runway and showed off the whole of that beautiful delta…wow. 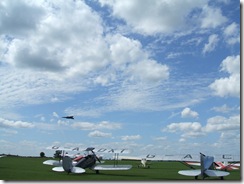 So what am I supposed to do now?

I have no job to worry about, no more studying to do…

Ok so first things first, the house needs to be sorted into some kind of order – moving house not only is a total pain in the bum, stressful beyond belief, but also provides a window into the depths of the deepest, darkest, most cavernous CUPBOARDS FULL OF CRAP. Argh, we have so much superfluous junk it’s barely believable. Ok so they’re no longer cupboards full of the stuff but boxes and bin liners overflowing with it, scattered willy nilly all over the house.

So the next few weeks of my life are looking to be focussed on the mammoth task of sorting out the useful and necessary, from the “what on earth?!” and the “why, why, WHY do we still have this?”, and then finding homes for it all…starting with the kitchen – deep joy.

Anyway on another positive note, I feel really rather relieved and happy that my Skills Test firstly happened, and secondly went really well. Today I managed to get the all the paperwork sent off to the CAA so hopefully in a couple of weeks I will have my pilot’s license in my hand – it’s quite worrying just how exciting that simple piece of paper is to me really, I know it’s just a piece of paper at the end of the day, but it’s also a piece of paper I have lusted after since I was eleven, a piece of paper I have bust a gut to gain and spent a fortune on in the process (hell, the only reason I put up with the last few months of crap at work was so I could afford this).

It may only be a piece of paper but it’s one of the most important (to me) pieces of paper I will ever own. So yes, I’m happy, excited, and very eagerly anticipating that envelope in the post.

Update: internet connection is still non-existent at the house, so I’m publishing this a few days after I first wrote it, using the free WiFi connection in the McDonalds 15 miles away, AND I’ve just eaten a McFlurry. Not good…

Ok, so after my rather moody post yesterday, the weather improved dramatically in the afternoon, so much so my examiner called me and said "fancy giving it a go now?", so obviously I said yes.

Long story short (I promise I will write a proper blog post on this when I have some time later, honest!), I passed my skills test yesterday afternoon.

So, yes, now I am a fully qualified pilot.

The fact that the house in Aston is now empty, the rings gone, my weights gone, me not doing any running (my foot is better but I don’t want to risk re-inflaming the Plantar Fasciiitis) and I’m not able to fly because of the weather has left me feeling rather despondent today – I need a hobby that doesn’t requite decent weather…maybe I need to start writing that book…

Anyway, I digress, the main reason for this posting is to provide a flying update – it has been going really well over the last week or so – I’ve got all my hours sorted, log book up to date, forms filled out, pre-exam profile run done (and it went really, really well), and was scheduled to go up with the examiner today to do the Skills Test (this is the one that, if I pass, makes me a pilot – it’s the license test).

Unfortunately, the weather has turned terrible and my test needs to be re-arranged. This makes life awkward as next week I am likely to need to do the test with a different examiner (not a big problem really though), but also because I will officially be living in Wales.

I will be having a talk with my instructor and the various examiners on Monday (the day we give the keys to the house here back), and will hopefully get another exam date arranged (whilst looking carefully at the weather forecasts), and may have to arrange to come over and stay with my parents. So all do-able really, I’m just disappointed not to have done it today – I feel so ready…