I was going to make my next blog entry a nice positive one about a day out I had last week flying the Pitts Special: it was one of the best days I’ve had in a long, long time and as such is one that I may indeed write about in the future, but for now I just don’t have it in me (sorry Paul).

I spent this weekend up in Scotland failing to climb anything for various reasons, but the main one being a piece of news I received from Phil on Friday evening (I’d headed up on Thursday you see). It would seem that our lives had suddenly become much simpler, or at least they will have once all the initial brouhaha is over and done with…

Possessions…who needs them right? Perspective is something that is often gained rapidly and with almighty clarity when all of a sudden you have none.

Ok, enough of the cryptic – Phil called me to tell me that we’d had a house fire. Mercifully no-one was hurt and we had no animals in the house either, but somehow those hugely important facts don’t feel quite as comforting as they perhaps should when what you’re hearing is “everything’s gone…everything”.

Now that’s all a touch melodramatic, as everything is in actual fact not gone, just covered in a thick layer of noxious black soot – the fire burned itself out in a smouldering pile of molten metal, plastic, carpet and electronic components. It did not follow the more obvious course of setting the bookcase alight and destroying the building as well as all of our worldly possessions for some reason (oxygen starvation most likely according to the fire brigade). So, whilst we do still technically own everything we did before, none of it is ever going to be useable again – the soot and smoke damage is almost total…

So where does that leave us? Well, we are now living in Phil’s cousin’s caravan perched precariously on our driveway, desperately trying to get in contact with the landlady (don’t ask, but until we do, the house insurers still won’t know what’s happened, and we won’t know what’s going to happen to us!), and waiting for our own contents insurers to send out their damage assessor on Friday.

So, life may be crap right now, but at least it’s simple! 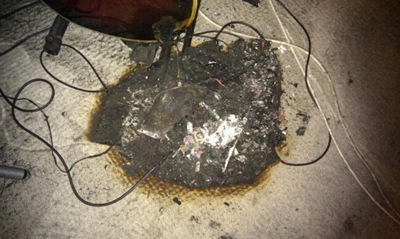 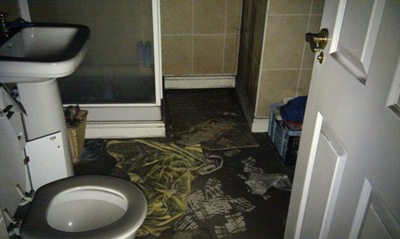 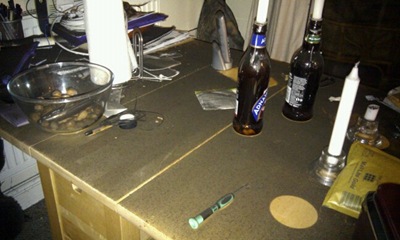 My blogging of late has been horribly lax, and my simple explanation as to why, is simply that I’ve had nothing to say, nothing I’ve wanted to share. I’ve been ill for what seems like weeks now, in fact ever since my ascent of Maesglasau Falls with Dave I’ve suffered a whole series of setbacks – first the bout of food poisoning that left me totally empty in more ways than one, then what I have termed the ‘uber cold’ (it wasn’t the ‘flu, but it did leave me feeling as weak and lethargic as my last bout of real ‘flu did), and now some inexplicable round of serious infection in my lip and gums.

So basically, thus far, 2011 hasn’t really been my year. I feel drained, horrendously unfit and pretty disappointed in myself. Plans had been forged to enable this winter season to be incredible – I spent most of the summer training my fitness, my strength and psychological levels were good, and then work came and after that the seemingly never-ending period of illness. It all feels like such a waste.

So, now I’m sat here, dosed up on antibiotics, still in a fair amount of pain (stupid gum infection), slightly depressed about how things have been going, but also feeling positive that I’m going to turn it all round.

Plans for more Winter forays are being made, partners are being sought out, training is starting to be done to get me back into a fit enough state to survive the Ben Nevis walk-in. Of course my trip to Rjukan in March is still enough of a way off that I may yet still be capable of climbing that WI6 I’m lusting over, so all is not yet lost!

I’m also working harder with my Mountain Rescue stuff – this weekend should yield some hilarity with my Helicopter and winch training scheduled for tomorrow at RAF Valley (I can’t wait!!), and next weekend is the ‘Casualty Care’ course, for which I have been struggling to study but mostly failing because I find the text book such hard work – I just hope I can retain enough from the course to pass the exam in February!

If all that weren’t enough, I’ve set up a couple of pages to raise some money for NEWSAR (North East Wales Search and Rescue) through two events I’m now signed up for:

Sponsor me (and Matt) in the Saunders Lakeland Mountain Marathon (my first ever MM) here: http://www.charitygiving.co.uk/laurenrichardson

Or, if you’re more of a road runner, sponsor me (and Matt again) to run the Snowdonia Marathon (my first road marathon) in October, here: http://www.charitygiving.co.uk/laurenrichardson2011

Both of these events will be serious tests of my resolve and my motivations, as I’m going to be putting in some real training efforts for both of them. The Snowdonia Marathon in particular scares me. I’ve never run that kind of distance before, and I’m out of running shape at the moment, but I’m determined not to embarrass myself and as such will also be participating in a few shorted distance races in the lead up (one of them will hopefully be the Lake Vyrnwy half-marathon, if I can ever manage to book a place, and I’m also now toying with possibly entering the ‘Race the Train’ event in Tywyn in August…should be an interesting year!)

Tips and encouragement will all be much appreciated, and I will be keeping the blog updated through the year with progress on how our training is going for each event. I’ll also be pointing out the links more and more as the time draws closer.