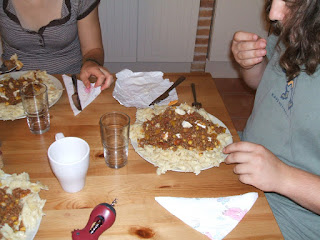 Ok so day 4 was a bit of a washout. We went to La Roche aux Sabots with doing the whole yellow circuit in mind (this was mainly Alex's goal so we all thought - great a nice day of fun climbing!). Anyway, we only managed 12 out of 34 problems before we all got fed up and went to sit down to eat lunch. Unfortunately it then started to rain quite hard so we beat a hasty retreat back to the car.

We had a bit of a play back at the training wall, doing some endurancy type circuit work (I felt the need to do more exercise after eating a fair amount for lunch).

Dinner was, well, large. Jen and Alex cooked Spaghetti Bolognese, or at least they would have if they'd found the spaghetti in the cupboard. Instead we had pasta bolognese. All fine so far, the trouble was they had decided to use a whole packet of pasta plus the remains of another for a meal for 4 people! Honestly, there was enough to feed 7 or 8! Plus we then finished the massive chocolate gateau from Monday night. Dear goodness was I full!

Tomorrow is a forced rest day. Slightly depressing as I'm desperate to get back to 95.2 to do battle with my 7a project again (a problem called La mur de la Fosse aux Ours).
Posted by Lauren at 10:18