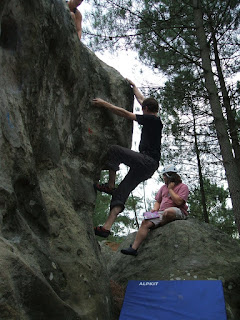 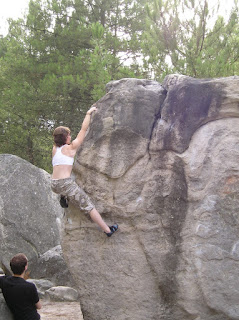 A good day all round. Dave's first day in Font - I think he enjoyed it.

Ok so I didn't get anywhere near to doing the 7a but I tried and I suffered for it. Nearly split a tip and ended up feeling incredibly battered. Such hard moves!
Anyway, my excuse was that the conditions were too bad - it was roasting! Apparently 32 degrees for alot of the day - the rock sweats. Jen and I failed to do a 5b we'd both flashed earlier in the week, purely because the rock was sweating so much!
Phil and Alex managed to finish their project so the day was still a good result.

Ok so I gave up on the 7a and we went off and explored 95.2 a bit more - it's a cool area. Found a nice arete problem, graded 6a that we decided to work. I managed it first (not that I want to brag ;) ) and then repeated it a couple of times (see bottom photo). Jen and Dave both did it too and were really chuffed :)

Again a nice dinner - Phil cooked a curry of sorts, once again lots and lots of good food. Oh, and crepes for dessert - amazingly fun. We even discovered that Dave truly is 'a great tosser' (his words not mine!).
Posted by Lauren at 22:29