I went to the wall last night to do some more bouldering. In 3 months they have only put up 4 new problems - very frustrating.
So once again I cruised up some of the old problems (in itself not entirely unsatisfying - doing V3 and V4 probelms you previously struggled on, as a warm up is a pleasant gauge of how well you're doing). Next, meeting up with some of the other guys I often climb with, we embarked on a mission to complete the 4 new problems on the super overhanging bulge (yes, I may be exaggerating a little).
One is easy, one is hard and two are super hard (for me anyway). Did the easy one, then worked the hard one. Eventually managed it - that felt good, especially as I managed it when some of the much stronger guys didn't!

I have some 'different' methods of climbing to most - being a weak and feeble woman I had to learn all kinds of different techniques and tricks from early on, simply because I didn't have the strength to get up things without these techniques. Hence, I am a big fan of the heel hook, toe hook, small footholds, drop knees and use of ridiculous amounts of flexibility...I often do things in ways that make the guys scratch their heads!

I do enjoy watching others climb, especially people who are better than/climb harder than me - you can often learn alot from the way they approach things, the subtleties of their movements, the simplicity of ways in which they often attempt things. (I especially enjoy watching if they're male, ripped and topless...but I digress).
Yesterday I got to climb with a guy I often 'problem solve' with - he's definitely one of those climbers I consider to be better than I am, but there are some things that I match and sometimes even exceed his abilities with - hence we usually have a good time trying stuff. Last night he was on form though - cruised both of the new 'super hard' problems, one of which I don't think I'm likely to do at all. He did manage to convince me to try the other one though - a powerful problem with awkward holds and needing lots of body tension. I spent my first few tries unceremoniously plopping off onto the floor. Anyway, to cut a long story short - I think I will be able to do it. This isn't exactly a big deal, and the only reason I mention it is because it feels a stage harder than anything I've ever done before (it may not be), it feels like the first tiny step off of the plateau - I hope!

(Photo below is an example of abnormal flexibility apparently. It didn't feel all that bad to me!) 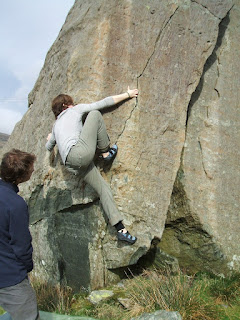