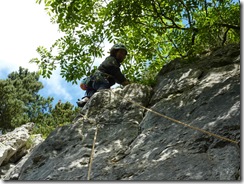 Ok so I admit it, I have some serious head issues. I mean, what is it that causes me to freak out when climbing a route using hand placed protection? Ok so I’m not the most confident climber anyway (falling? What’s that? I’m too scared to fall indoors let alone out), but it seems that traditional climbing brings out the worst of my issues much more directly and strongly than any other form of climbing. Ok so that may sound logical to most, after all, relying on small wire wedges in sometimes questionable placements has got to be more dangerous than relying on a nice solid resin bolt yeah? Well for me the head issues used to be the other way around, I used to get far more scared on sport routes than traditional ones – a phenomenon I could only reconcile by assuming that the focus and concentration required to place solid gear on a traditional climb brought me a seemingly higher level of confidence in my own mentality and control than the simple clipping of quickdraws required on sport lines. I also used to think that traditional routes may have offered you more freedom of direction and routing than that provided when you have to follow a trail of steel hangers…however, my views of the different forms of climbing have begun to change…more on that soon.

Anyway, this week has been moderately successful training and climbing-wise as I have managed to do a decent length run (admittedly really slowly, more of a jog really I guess), a couple of wall sessions at the Beacon (which were INTENSE), and have been out real climbing on a day where the sky didn’t seem to be caving in on us like someone had left the taps on in the bath and the ceiling had finally given way.