axe update and a brief tutorial on using self amalgamating tape

I post previously about modifying my ice axes to make them a bit more user friendly (primarily when dry tooling) by using self-amalgamating tape to enhance the grip of the shaft. I also promised I would write an update after I had tested the new grips out, and this is it.

My concerns about the tape getting worn and damaged still stand, but don’t feature too highly as an issue as replacing the tape is very simple and inexpensive. Anyway, not only have I tried out the new grip position on the dry tooling board, but I have tried them out on an ice route (see previous post about Aladdin’s Mirror Direct). My observations:

The biggest revelation for me was how much more pleasant the axe shaft was to hold with the tape on compared to the bare metal shaft. Holding onto the shaft was like connecting yourself to a heat-sink – the metal is COLD, and as such makes your hands cold, even through gloves. Now, this is all fairly obvious stuff really, but one of those things that I needed to try out and experience to learn the real lessons…

So, some further modification has had me make a ‘third grip position’ with tape, this time at the top of the shaft, not for pulling on in the conventional sense, but to make using the axes in the daggering* position more pleasant and less likely to induce the hot aches.

To say I am pleased with these simple little modifications is an understatement, not only are they hugely effective, but they actually look quite good too (there’s definitely something about tools that look like they’re used and cared for, and that some thought has gone into their use, isn’t there? A bit like the opposite of the ‘all the gear, no idea’ notion). 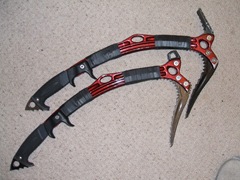 The tape you want is self amalgamating tape, available from places like Maplin or Screwfix. This tape is essentially just a strip of rubber which, when stretched and stuck back onto itself just self-fuses, so there is no adhesive involved to come unstuck when wet or anything like that.

Tips: the classic mistakes people make with this stuff (and having used this type of thing at work for 6 years believe me I’ve seen all kinds of basic errors) are firstly and most embarrassingly, not removing the backing tape and then wondering why it’s not sticking to itself. Give yourself a slap if you do this. Secondly, the other classic error is to simply stick the stuff directly onto itself without tensioning and stretching it – the tape is springy rubber and you need to stretch it out as you apply it (stretch it as much as you like, just don’t snap it), so that the elastic pull creates a sort of tensioned fusing joint where it contacts itself. Remember this tape has no glue and so it does not stick to things – you need to tape it to itself for it to stick.

If you use quite a thin tape (such as the type available from Maplin), you need a minimum to two layers of tape otherwise it will simply be too flimsy. You may even want 3 or 4 layers depending on what you are doing and the use and wear it’s going to take.

*daggering – holding the axe at the top of the shaft, just beneath the head and stabbing the pick directly into the slope, not swinging it from the handle. This is a technique used on easier angled snow and ice slopes.