first winter route of the year

Patrick and I journeyed up to the snow and ice of the Cairngorms over the weekend, the aim being to have 3 days climbing in Coire an t'’sneachda. Monday was our first day out (and my first day out after contracting a nasty strain of the flu a couple of weeks ago), so we headed for Aladdin’s Mirror Direct – a route that I seconded last year as my first experience of ice climbing, and as such, had a real desire to go back and lead myself.

The ice fall was in surprisingly good condition considering it is only December, and we followed another pair up it, and then up the last 2/3 pitches of Aladdin’s Mirror.

I would just like to say a big thank you to Donald, the climber I met at the belay above the ice fall, who left one of his cams for me to use. Unfortunately I can’t read the postcode written on the label on it, so I’m currently on a mission to find out where to return it to, but anyway…

The route was a mixed experience for me, the ice fall was fine, although I will admit, pure ice climbing in my stubby ‘mountaineering’ crampons is not that pleasant an experience – but my G14s (currently set up as mono-points) would have been a terrible choice to use given the conditions on the rest of the route, an easy angled snow/ice gully. The gully was where it got ‘interesting’ for me, because I had made a rather foolish decision sometime last week: calf raises. I did a couple of sets of 50 calf raises, to the point of cramp in the muscles, and unfortunately seem to have given myself a kind of perma-cramp. Front pointing up easy angled sh*tty snow and ice in a gully was probably the worst and most painful thing I could have done given the state of my perma-cramped legs – I did not enjoy it at all.

(Actually, the state of the rock was somewhat challenging. We spoke to a fair few other climbers who had done actual mixed lines and they all agreed with what we had experienced – lots of very pretty rime ice build up on the rock, that was completely unusable for climbing, and also lots of ice and snow making finding gear in cracks damn near impossible.)

The gully was also a great big pointer as to just how much the flu has taken out of me, I mean, a few weeks ago I was feeling strong and reasonably fit. Now, I have a base level of fitness lower than I can remember it being for years, oh and no stamina whatsoever, as I am about to explain with some not inconsiderable disappointment…

After Monday’s efforts I was ‘done in’. Tuesday simply wasn’t going to happen – I woke up and just knew that I wouldn’t even manage the [easy] walk-in. So we spent the day bumming around cafes and shops (more on that in a later posting). The real kicker to this was that the day turned out to be stunning. Sort of Alpine in style of weather – beautiful clear blue skies and very very cold, so perfect for climbing. We were hoping that Wednesday would be similar, but British weather is a fickle and unpredictable thing, so of course we had 4-5 inches of snow overnight meaning that the ski road was closed and of course conditions would have been really rather hard going and unpleasant. So we drove home. 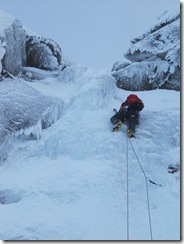