On Monday Patrick and I did manage to set off to the Ben after that stupidly early alarm clock (and unfortunately for me, not much sleep as I just couldn’t stop thinking about the route!), for my first time on Tower Ridge (and his 4th or 5th!).

I’ve wanted to do this route for a while now, since before I’d even been to Ben Nevis (which, for the record was for the first time around this time last year when I first met Patrick and we climbed Ledge Route, but I digress…)

Tower Ridge is the longest winter route in the UK, although its actual length remains somewhat of a mystery to me – one of our guidebooks quotes 800m, another 600-1000m. So I guess the actual length depends on where you consider the start to be – at a guess it is 600m from the Douglas Gap (reached by climbing up a gulley on the East side of the Douglas Boulder).

Snow conditions weren’t ideal, with some sections of very scary loose powder on top of…well not much really, meaning the sections of snow that were good, felt amazing.

The three cruxes – the starting chimney (where I managed to get myself into a right pickle and only managed to progress by using a combination of bare hands and axes and crampons on rock and knees on whatever the hell I could get them onto, needless to say I looked like a real pro!), the chimney thing after the Eastern Traverse (which Patrick led as I did the Traverse itself, and which turned out to be really rather ‘out there’) and Tower Gap, were all of course in do-able condition, but possibly harder than when conditions are somewhat better!

I hate to admit how hard and scary I found Tower Gap, but place that down to how tired I was feeling by then and how little food I’d eaten all day. Anyway, it was done eventually and the final exit slopes were wonderful, especially after I was on the top!! 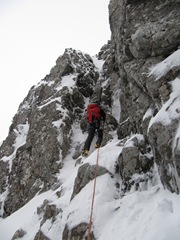 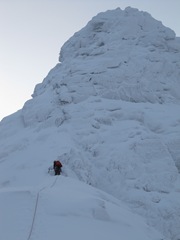 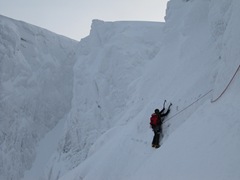 Me on the Eastern Traverse 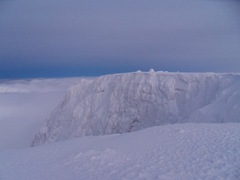 View over to the summit