Saturday: I was still not feeling too great so we headed back to the Moelwyns for some more pleasant, relaxed, sunny climbing.

The White Streak/Honeysuckle Corner – HS 4b. (Craig yr Wrygsan) A combination of two routes which in reality should only be one anyway! The guidebooks (both Meirionnyd and North Wales Rock) both give this combo 2 stars, but in all honesty I would easily give it 3, it is a simply fantastic climbing experience. Patrick led the White Streak - a long slab which can be split into two pitches, but is much better just climbed as one long one up to the big ledge (‘the Pasture’) and is quite bold in places (i.e. very little gear of substance), but is climbed on fantastically massive gas pocket jugs – they are holds of wonder, seriously!

So Honeysuckle Corner was my route of choice, and I must say it was a cracker. A steep pull into a corner groove with lots of good holds, some fantastic bridging and great gear (or at least it is if you bother with it), leads you up to some ledges and a huge block belay at the very top of the crag – a fantastic place to enjoy the sun and the view. This pitch is HS 4b, but for some may well seem more like VS simply because of its steepness, but don’t let that put you off, the moves and holds are good and the gear is plentiful – go do it! 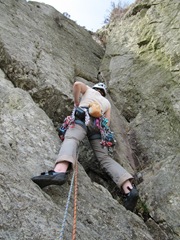 The walk down from the top of this crag is also quite something – you wander down the back into some old quarry workings, and make your way down into a tunnel through the crag where the old incline runs. Step over the old incline engine machinery and make your way down through the crag! Turn off to the left down from the incline back to the base of the crag either before the ‘Danger’ sign or just after, it doesn’t matter. Then go and climb something else, even if it is easy… 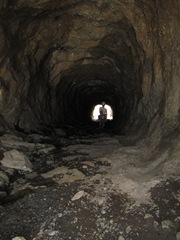 Y Gelynen – VDiff but with a Severe variation finish. I know, me, climbing a VDiff. A bit of a rarity huh? This was the other route that got 2 stars in the guide and just looked a really nice line, and indeed it was. I would say though, that if you aren’t confident climbing Severe or above, this route may prove a rather serious proposition – the first pitch is described as ‘bold’, so read this as ‘has very little gear and quite alot of exposure’. Good holds though, and so long as you keep your head together and just keep on climbing, rather than looking for gear where there really is none and proceeding to panic, the sanctuary of the somewhat uncomfortable but well endowed flake belay will be yours without any real drama (and yes, I did actually lead this pitch without any drama thank you very much). 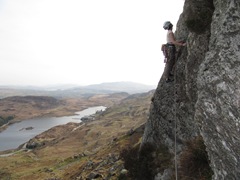 The second pitch is quite short but straight forward, although once again is rather lacking in meaningful gear to start with – very simple to second! You end up on the big ‘Pasture’ ledge again, after which a third pitch takes you to the top – here you have a choice of the VDiff option up the steppy buttress part, or the vastly superior and really rather fun groove just to the left of the VDiff line – this variation bumps the grade up to Severe as it has a couple of harder moves, although this time with some good protection options (and as I led the first pitch, I rather pleasantly got to lead this one too). You could run the second and third pitches together if you wanted to as they are both quite short, but we decided it would be more sociable to climb it in two as per the guidebook – so we were able to shout abuse at each other the whole time!

The Moelwyns are currently my absolute favourite place to climb, the atmosphere is lovely, the rock is great and the routes are good fun. I just hope it all stays this way and doesn’t become another packed ‘Stanage-esque’ venue where you find yourself queuing for routes polished well beyond their prime state. That said, I do think more people should experience just how wonderful some of these crags are and get a real taste of what Welsh rock climbing is all about.