Or at least you will if you’re ammunition is good and your sights are set straight and true.

Sounds like I’m getting all philosophical doesn’t it? Well maybe I am a touch, but this post is actually really about guns and shooting – yet another semi-hobby of mine. I say semi-hobby because it isn’t something I do terribly often, seeing as our guns are very kindly being kept by Phil’s cousin over in Northamptonshire somewhere – this does of course mean that any shooting trips have to be accompanied by evenings of deep inebriation, followed by a horrendous hangover, which is of course exactly what you want when someone is having fun with a shotgun right behind you.

Anyway, yes, I can shoot. I prefer rifle shooting to shotguns primarily because I’m pretty good at rifle target shooting, whereas I’m completely useless when if comes to clay shoots. A couple of people have made somewhat scary comments comparing me to Lara Croft – after all I can climb, I can fly, I ride a motorbike, and I can shoot. Frankly though, I’m more realistic about the comparisons – my boobs are too small and I don’t look overly brilliant in tiny little combat shorts.

The weekend was spent very entertainingly (and relaxingly) eating, drinking, and shooting the crap out of whatever we could find as a target (I got bored of patterning on actual targets – making holes in pieces of paper simply isn’t as fun as watching large chunks of glass or sandstone explode into thousands of tiny pieces). I favoured the .22 rifle and managed to get through a fair few boxes of ancient ammunition (some of it was dated 1944), whilst Phil and Arthur took it in turns with shotguns and Phil’s compound bow (archery is not my thing). 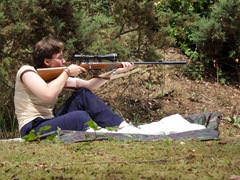