For anyone that knows me, the idea that I have decided to gain the Mountain Leader qualification may be rather suprising, but there you go, I’ve registered with the MLTW and have a log book and everything, I just need to fill it.

And that’s why I’ve managed to get up off of my lazy butt and go for another decent hill walk, up another mountain I had yet to experience – Aran Fawddwy.

Situated not far from the village of Dinas Mawddwy, Aran Fawddwy is the 16th highest peak in Wales at 905m (and is only 9m off being classed as one of the Welsh 3000’ers), but being relatively inaccessible is actually pretty quiet.

The route I took went from Cwm Cywarch (parking, and also a massive set of crags I’m desperate to climb on, so if anyone fancies some slightly adventurous rock climbing and would be willing to head back here with me, please drop me a line!), up to Waun Camddwr, along the ridge bog boardwalks, across a completely unnecessary section of marsh where I realised that not following the fence had been a mistake, back to the fence line and up to the summit. The descent was back down Drws Bach, past the cairn (which is a memorial to Michael Robert Aspain a member of an RAF Mountain Rescue team based in St Athan who was killed there by a lightning strike in 1960 whilst on duty. He was 18 years old.) and onto Drysgol, eventually heading down the long dull slog of a path back to Cwm Cywarch. 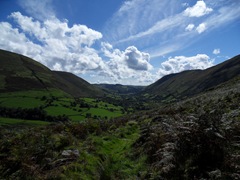 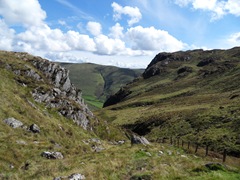 The view back down the edge of Craig Cywarch 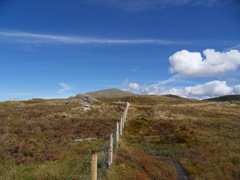 Aran Fawddwy for the first time, still a horribly long bog slog away