Another long silence for which I will apologise, despite knowing that no-one cares about the apology…

I arrived back home late on Thursday after a marathon drive home from Arolla, Valais, Switzerland. Yes, I’ve been back to the Alps! This wasn’t an ordinary Alpine climbing trip though, this trip doubled as mine and Phil’s summer holiday, and also my first meeting with Alex*.

Sadly, the weather was once again against us and we got very little done climbing-wise (only one super easy ‘acclimatisation’ route and some bimbling on a cruddy little sport crag actually, although the chilling out and wandering the valleys was really rather lovely), but I would just like to confirm that the campsite in Arolla is fabulous for bumming around on continually making tea and eating biscuits, although needing 1F coins for the shower is a little bit of a pain.

The Pigne d’Arolla is a lovely mountain at the head of the valley overlooking Arolla itself. Two huts serve as bases for an ascent – the Vignettes hut and the Dix hut. Often the peak is climbed in conjunction with Mont Blanc du Cheilon as a long traverse – the route up and over the Pigne being graded Facile, and the ascent of the East ridge of Mont Blanc du Cheilon being graded AD (the normal route on MBdC, and the descent from the traverse is a PD).

Our plan had actually been to make an ascent of Pigne d’Arolla, from and back to the Vignettes hut as our first ‘acclimatisation’ foray, hopefully to be followed by an ascent of l’Eveque, also from the Vignettes hut. Sadly this wasn’t to be as the weather didn’t want to play ball and we had several days of storms, snow and general mank meaning we abandoned the idea of heading up l’Eveque. (We also later abandoned our plans of heading up Mont Blanc du Cheilon from the Dix hut too owing to a combination of bad weather days and me falling ill on the last [irritatingly clear] day).

After ‘tagging the top’ via the Facile route, Alex and I headed straight back down with a brief stop back at the hut to retrieve the kit we had stashed behind and to have a drink of tea.

The route up itself is pretty unremarkable, being as it is a simple snow plod and a short section of moraine path, with only a few obvious crevassed sections to negotiate. The views however, are stunning. The views on the approach are fabulous but from the summit the panorama truly is breathtaking, with the Matterhorn visible in one direction, Mont Blanc in another, and lots more in between. 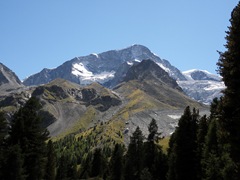 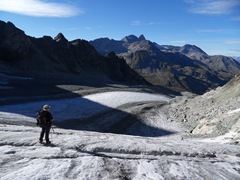 Alex and the glacier approach (that for once was refreshingly straightforward – I do hate crevasse hopping!) 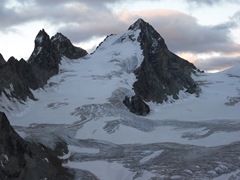 One of the stunning views of l’Eveque from the balcony of the Vignettes hut, an objective sadly abandoned due to the weather 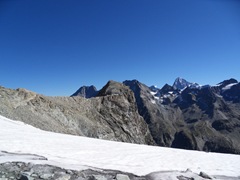 The Vignettes hut, as seen on our way back down.

Alpine climbing is a wonderfully varied experience – from the hustle and bustle of Chamonix or Zermatt with their expensive shops and even more expensive uplift options (cable cars, trains etc), to quiet secluded village bases such as Arolla. Where you base yourself has a huge impact on your experience in the mountains, a place like Arolla granting you the very basic essence of it all – the mountains themselves all around you, with no flashy shops or expensive bars to distract you from what it’s all about. I liked it, lots, although I do still hate long hut walk-ins…