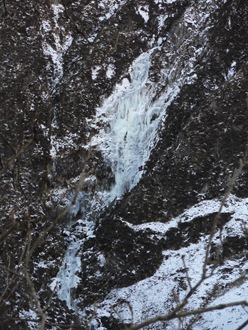 Last Wednesday, myself and a certain Mr Williams (the man who thought so much of my belaying last year he decided to fall off of a route and break his heel after landing on me), decided that the weather had been cold enough for long enough, that we would make the trek into Craig Maesglase and have a crack at “one of the best ice routes in Wales” as it was known to be in condition (although the type of condition it turned out to be in was somewhat interesting…read on!)

This route has been right at the very top of my wishlist ever since I first heard about and laid eyes on it last year, and for good reason. Five pitches of steep pure water ice, only 35minutes from home…how can it get any better? 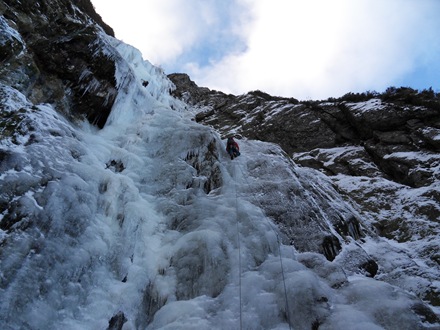 Ok well there is one way it could be better: the approach. Grim doesn’t even begin to describe how utterly disgusting and harrowing the final part of the approach up the stream to the base of the route is. But you can’t have it all can you? Parking is fine, and you begin your approach through the farm – please talk to the farmer on your way through if you head for this route, he is an absolutely stunning chap who is more than happy for people to climb his ice-fall, but who likes to know how many are on it and when so that should anything happen he can initiate rescue proceedings if needs be (there was apparently an incident a few years back where a solo-ist got trapped on the route in bad weather, leading to an absolute rescue epic).

The first pitch wasn’t really ‘in’, we simply solo’d up the side of the very thinly iced waterfall on frozen vegetation (think frozen spray on ice on fern fronds, very weird, but ok to get up really). The second pitch (shown above with Dave leading, and below with me following) was steeper than it looked and actually really good fun, but the meat of the route came in the third pitch – a steep and weirdly formed beast of an icefall, one where I was grateful I’d chosen to give my new nomics an outing! 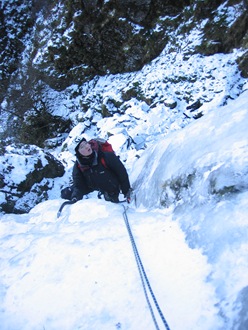 “Ah it doesn’t look that bad, it’s not that steep!” are words you should never ever utter just before you set up the crux of a rarely formed welsh waterfall. You should also pay attention to where the party in front of you chose to climb the route…

What you can’t see in the picture below is the actual formation of most of the ice in the steeper upper section – it wasn’t a nice uniform homogenised fall, as would be ideal, it had actually formed as a load of mushroomy blobs, that could only be climbed by hooking your axes way over the back of them – hitting just wasn’t an option, nor was placing decent gear in much of it. I ended up run out and a little scared after I’d taken what turned out to be the incorrect line and crossed the still running fall…

…I was left with two options, reverse the terrifying and damn near irreversible and unprotected traverse I’d just made, or climb up the edge of the still flowing waterfall to where I could cross back into the finishing groove. Not being a fan of traverses or admitting my mistakes, of course I carried on upwards, where I was to find myself thanking my lucky stars that I had for the first time in many years decided to completely ‘armour up’ in waterproof hardshell gear.

I feel like I’m a much more ‘rounded’ and ‘experienced’ ice climber, now that I’ve finally experienced what it’s like to have ice water running down my sleeves, down my back and my belly, down my legs, down everything. “I didn’t realise you were getting wet up there” whimpered a completely ice coated Dave upon arriving at the belay after seconding the pitch… 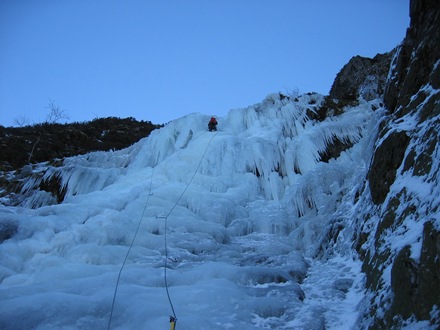 Sat at the belay, having battled to find enough solid ice to sink three ice screws after finally regaining my breath and lowering my heart-rate back to somewhere nearer normal, I couldn’t stop a big grin spread across my face as I realised we were going to do the route. The view out across the valley was beautiful, and the view back down the crux pitch had been breathtaking, mesmerising even, and I was finally able to start taking it all in. This is why I love ice climbing.

As I sat watching the hills start to turn a gorgeous shade of pink, our late start and status of being at the very back of a long queue of climbers on the route that day suddenly hit me. “Oh god, we’re going to end up climbing in the dark!” Quite why that thought bothered me I’m not really sure, I mean I’ve climbed in the dark plenty of times, and in winter it’s often all part of the game. I had a good headtorch, and the hardest pitches were over, I shouldn’t have been at all worried, but somehow I was.

Dave flew up the next pitch and through the weird cavey section where I just stood and gaped for a couple of minutes, not quite able to work out the best way to proceed (obviously being a caver helps when squirming through semi iced-up narrow stream gullies), and eventually we somehow ended up stood at the foot of the final pitch with enough daylight for me to get up the slab and out at the top whilst it was still light! Dave had some fun finding foot placements in the rapidly fading half-light… 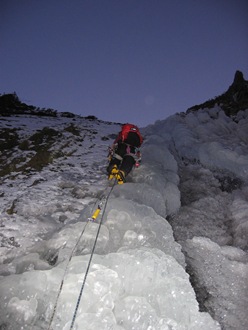 So, yeah, we did it, and thankfully the walk-off is nowhere near as unpleasant as the approach (although it did take a while with us both being tired and Dave suffering a bit of foot pain by that point).

Is Maesglasau Falls one of the best ice routes in Wales? I think so. Was it worth the effort? Definitely.

Unfortunately, it’s taken me a while to write this blog entry as I made the mistake of having a crappy fast food meal in the evening before going home, and ended up with a nasty bout of food poisoning. I guess it served me right for choosing to eat crap but I really wouldn’t wish this kind of illness on my worst enemy – spending 4 days without sleeping more than 1-2 hours at a time, expelling 20 times* your own bodyweight, and living with a constant throbbing headache really isn’t fun.

*The amount may be a slight exaggeration