2011 has been a bit of a strange year for me all told. Several events have led to major changes in life, lifestyle and perspective – the most significant of course being our catastrophic house fire back in January. Nothing I’ve experienced works quite as effectively to focus the mind on what is actually important, than losing all your possessions (although I can’t say I recommend it to anyone). The events following the fire also served to change a few of my views on life – living in a borrowed caravan on my own driveway for instance, led to me realising that actually houses and home comforts, whilst being nice, aren’t actually really necessary. Being seven months on from the fire and having still not had all of the [frankly piffling amount of] insurance money we are owed has taught me that insurance companies are generally pretty damned useless and should not be relied upon (and also that having a nice comfy sofa to sit on is something we all tend to take for granted). The list goes on and on and on, but at the end of the day, no matter how negative the events of life, all of them can be used to have a positive effect on your perspective if you allow it. All of them.

So, here we go, perspective. It’s all too easy to get bogged down and focussed on little things and miss out on the bigger picture – losing perspective. This applies to pretty much any aspect of life (as well as life itself of course), and flying aerobatics is no exception. The biggest learning curve I am currently going through is very definitely one of perspective, or perhaps perspectives [plural]. Let me explain:

Flying itself is a fairly complex pastime to take up – you have all sorts of things to learn and think about and eventually you kind of have to do them all at the same time. The controlling the aeroplane bit is actually a relatively small part of what it is to fly – you have to navigate, talk to people on the radio, maintain heights and headings, listen to people on the radio, look out for other aeroplanes, keep track of how much fuel you’re using, keep an eye on how the engine is performing and a good number of other things, and all of that is just in straight and level flight. It sounds like a lot doesn’t it? When you’re first starting out learning to fly (actually, no matter how experienced you are this all still applies) it can all seem quite overwhelming, to the point where the big picture can end up blurred or lost as you fixate on perhaps just one or two things at a time – for instance concentrating on maintaining an altitude and spending far too much time looking at the altimeter and trying to make micro-adjustments can all to often mean you fail to spot that other aircraft heading toward you…

Learning to fly aerobatics is something that gives me immense amounts of satisfaction, primarily because it presents such huge challenges – learning how to handle a high performance aeroplane with precision and accuracy is enormously difficult and as a result incredibly rewarding. It can also be hugely frustrating at times, and sometimes it’s easy to get bogged down by this and lose sight of the sheer joy of it all.

I’ve always been a perfectionist in everything I’ve ever done, and to me mistakes are the enemy, things to be analysed and understood so that in future the causes can be resolved and the consequences eliminated. This is at once a really good way to approach aerobatic flying, and also a really bad one because I often end up fixated on what I’ve just done wrong in a manoeuvre in the middle of a sequence rather than focussing on what should be coming next (which as you can probably imagine then usually leads into a spiral of more and more mistakes and frustration). The big picture in this case is really quite simple – what does it look like? I need to be thinking “what is it looking like to the judges on the ground?”, and if I’ve screwed something up, “ok, what can I do to minimise the impact of my mistake on the rest of my sequence?”. I should NOT be thinking “bollocks, bollocks, bollocks, arse, that was shit…oh crap I can’t remember what’s next”. 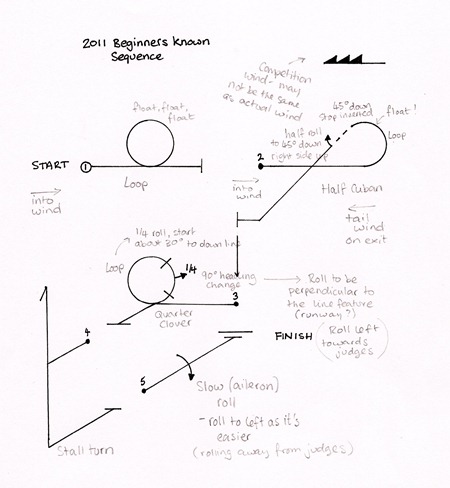 Recently I’ve been doing some fairly complex flying, learning manoeuvres and sequences that are far beyond any that will be expected of me in the beginner’s (or basic) category. Hopefully this will mean that I’ll have a good chance of not screwing things up too badly. In the next category up (the Standard category), the sequences are about 10 manoeuvres long, including one that is “Known” and one or two “Unknown” that are given to you on the day to be learned and memorised. Next year I will be entering the Standard category and hoping to do quite well, but right now the single, 5 manoeuvre “Known” sequence of the Beginner’s class is feeling daunting enough…

The diagram above is the sequence I will be flying, with some of my ‘notes to self’ included. Allow me to attempt to explain:

So there we have it, that was the sequence I’ll be flying next weekend. Hopefully I won’t get too bogged down by details, and perfectionism, or fear or stress, and will be able to simply enjoy the dream of flight. Wish me luck.