Picture the scene – I’m at Shobdon airfield having just landed the Pitts for the nth time (I’m on the circuits at the moment trying to make my landings more consistent before Paul lets me loose on my own) and have a somewhat mad rush home because we’ve run late due to the rainy weather.

I rush back, to discover that the chap I was supposed to be meeting at my house, was in fact not at my house despite the message he’d sent saying that he thought he was…cue a short search and phonecalls to reveal that he’d made the mistake I’d told him he would, and had ended up at the house the sat nav will have you believe is ours (when in fact it is not).

Five minutes later and a certain Mr Phil Sorrell (aka DaylightGambler) had arrived on my driveway along with his dog, Angel, and a big bag full of alcohol.

This was to be the beginning of a slightly unconventional weekend for me – firstly because a trade deal of cider in exchange for a home baked toffee apple cake meant that on Friday night I ended up insanely drunk on a combination of the aforementioned cider and several different single malt whiskies, secondly because on Saturday I spent the entire day wishing I was dead. The hangover caused by Friday night’s excesses (actually, we were still drinking at 5am Saturday so I really do have no-one to blame but myself) was truly horrific and as a result we did nothing but sit, lay down, sit, grumble, eat bacon sandwiches, drink coke and finally bake the promised cake.

Eventually the pair of us (aided by my long-suffering legend of a husband) gathered ourselves together enough to head out onto the hills on the estate out back with our tents, for a surprisingly lovely ‘wild’ camp. There’s something about walking up into the hills by the brilliance of a near full moon that’s truly special. 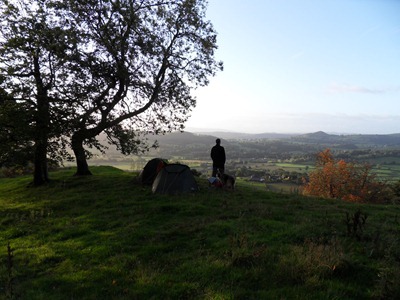 Phil admiring the view  (yes, this is indeed where I live, and I most certainly do know how lucky I am)

Upon waking up on Sunday morning after said camp, the view was stunning. The bad weather had cleared for a few minutes and we sat and just drank it all in for a while, braced by a clear wind and with eyes set upon a life-affirming landscape vista.

Our tranquillity was broken a short while after we’d managed to brew the all important cuppa, by the grim greyness that we’d been expecting and so we set upon striking camp with a deal of haste before we got drenched.

After a breakfast omelette back at home we eventually settled on doing a simple walk at Lake Vyrnwy and heading up along the line of the waterfalls on the northern side. At least, it was meant to be simple… 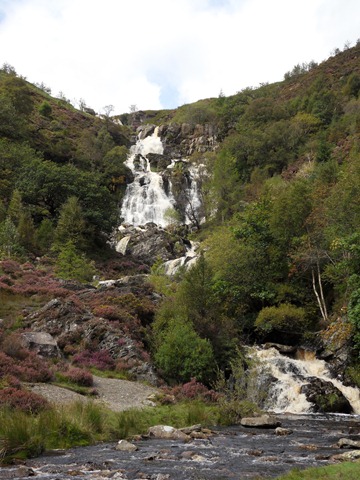 Personally, I’m not the world’s biggest fan of bog-trotting and marsh wandering, and so the next few hours were not necessarily my idea of heaven – it looked on the map like we were heading for a nice simple circular route up following the stream until we reached an old dwelling with a track leading back down through the forest to the road…The distinct lack of paths on the map were a clue to the nature of what was to come – the Berwyns are an area reasonably famous for their bogs and peat hags. 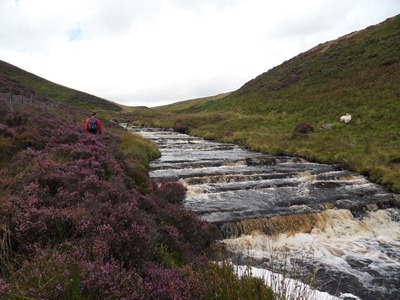 It may LOOK lovely, but the next part was really rather cack

Ok, so at the time I didn’t really enjoy having my boots fill with stream or my trousers absorbing several gallons of boggy poo water, but it’s always a good laugh afterwards, and this walk was no exception, and the area is undoubtedly a beautiful wild place and somewhere I truly feel at home.

Phil has been excellent company, and I look forward to sharing a few more days in the hills with him (assuming he’s not decided I’m some mad woman he never wants to be involved with ever again), although perhaps will less whisky next time…