It has come to mind of late, that I may well have been losing touch of some of the things that are most important in my life. This flying business has been taking over so much of my time that most everything else has been put on hold or neglected in some way, this blog being no exception.

I’ve had very little time in the hills, virtually no time climbing and minimal time on the mountain bike over the past couple of months, and it became very apparent to me on Tuesday, just how much I’ve been missing it all, even if I’ve failed to realise it at the time. On Tuesday I met up with my old friend Adam for a blast out on the mountain bikes over on the Long Mynd.

I love the Mynd, it’s just a beautiful part of the world, the views of Shropshire and across the borders into my home county of Powys are truly gorgeous, and the geography of the whole thing is wonderful and makes for some cracking walking and/or biking.

It had been a good month since I’d last had the bike out, a fact of which I was all to well aware on the first bit of ascent. The pain in my legs and lungs was almost entirely quashed by the simple joy in my heart at being out, up there, breathing the fresh air with the wind in my face and a good friend by my side.

The joy did rather change to fear and cramp in my hands and feet as our descent of Minton Batch under what can only be described as ‘rather muddy’ conditions very quickly revealed just how poorly my tyres grip in slippy, gloopy Shropshire muck (my tight-fisted desire to not spend any more money on bike parts may have now developed a tyre buying exception clause). A major sidewinder moment left me wondering exactly how I’d managed to not end up on my face in a pile of sheep droppings as I heard the never to be forgotten cry of “there’s a puddle in my gusset!” from a rather amused, if damp Adam riding behind me.

Wet it was. Muddy it will probably remain for the rest of the winter, and a joy it will always be. I love Minton Batch, I love the Long Mynd and I love being out in the hills. 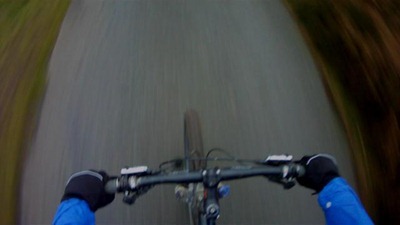 Roll on the winter and some more soul clarifying days and nights into 2012. I’ll be back to re-sample my sanity out there as soon as I can.