Disclaimer: I mean no offense to anyone whose primary hobby is lightweight backpacking or camping, in fact I have a great deal of respect for the ideals and practices of those for whom the way of the scales is a way of life, however, this way of life is not mine, and as such I may just take the pee a little. Sorry.

‘Oh my god’, you’re probably all thinking, ‘please don’t turn into one of those thousands of lightweight backpacking blogs’ – you know, the ones written by people seemingly obsessed with cutting every last gram of weight from what they’re carrying, quite literally.

Now, I’m not one to slag off what are often very well thought out, entertainingly written and occasionally inspirational articles and posts, but come on people – cutting off the handle of your toothbrush to save weight? Is this not a tad excessive? Besides, why are you even carrying a toothbrush on a single night’s wild camping on Dartmoor?
So what’s my point? Well I guess my point is that the ‘going lightweight’ concept does very much have a place in modern day hill sport, be that walking, climbing, or in the most critical and extreme cases, Alpinism. However, it often seems to me that the increasingly popular gram counting, lightweight backpacking obsession is just a futile exercise designed to encourage people to buy more and more expensive gear.

That said, some of the lightweight backpacking forums are actually full of homemade kit ideas, where people have decided that commercially available products either aren’t light enough or simply don’t do what they envision wanting. Sometimes all this yields is a vast number of slightly different designs for gravity defying alcohol stoves, which, whilst looking like great fun to make, would likely be woefully inadequate when battling your way up a 3 day route on a large Alpine North face. Sometimes though, these homemade options really do make a difference.

Now, I’m not interested in carrying a pack that weighs less than one of my bras when I go wild camping, far from it – for me, the heavier the bag (within reason), the better the training effect*.
I am however, hugely interested in ways of reducing the load needed for an Alpine bivvy, and also ways of improving the efficiency and effectiveness of the equipment I do carry. And this is where the lightweight backpacking concept steps in to provide ideas and inspiration.

Often the best way of reducing the weight of what you’re carrying, is simply not to carry it. Leave the things you don’t absolutely need behind. To this end, my latest project has involved cooking equipment, or more specifically, my cooking pot.
I own several pieces of ‘camping cookware’ from kettles and large pans, to mugs you can cook in. By far the most useful and versatile item I own though, is a simple 1l ‘solo’ pot made by Primus (I think it’s called a Trek Kettle or something like that). Now, it may not be the lightest option out there, but it’s a good size, it’s sturdy and well made, and most importantly, I like it. The only negative side it has is the fact that the ‘lid’ is actually a mini frying pan.
Why is the frying pan lid a negative? Surely it just makes the thing more versatile? Well, yes and no. Yes it does make it more versatile in principle, but I’ve never used the damn thing and can’t ever envisage doing so. It is also quite heavy, so leaving it behind is no loss, except of course, it is a loss because all of a sudden the pan has no lid and loses a great deal of cooking efficiency, meaning you use more fuel.

So what to do…
I decided to make a new lid. A lovely, simple, homemade, cheap (aka free), lightweight lid: 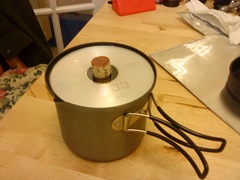 I was stunned and delighted to discover that a normal CD was actually the perfect fit, and upon testing it proved to be really rather efficient as the inside layer is of course reflective. The only question then was of what to make a handle out of when a blinding flash of inspiration hit me – Phil was drinking wine…So I simply carved the cork to wedge in the hole in the centre of the disk.

I don’t know how long this lid will actually last, but seeing as it was essentially free to make from waste products and only took about 2 minutes to work and assemble, it won’t exactly be a problem to replace it every once in a while.

On a slightly different note, anyone with some time to kill could do worse than to entertain themselves by browsing some of the ‘lightweight’ forums, especially the American ones…there really are some fantastical and bizzarre ideas out there…


*For anyone who hasn’t been following this blog for long I shall just summarise – I’m primarily a rock climber, but am also broadening my horizons into the world of Alpine Climbing and Mountaineering, so for me, days spent hacking round the Welsh hills with a hefty rucksack, provide good ‘hill training’ in preparation for carrying big loads of climbing equipment on top of basic bivvy gear, at altitude. The fitter I get, the better I will do when I head out to the proper mountains. So whilst carrying a rucksack that weighs less than a packet of crisps is undoubtedly more pleasant than carrying a full load of ropes and hardware etc, it simply won’t provide as great a training effect.
Posted by Lauren at 17:09