It is a sunny Sunday on a Bank Holiday weekend, hence today’s little climbing adventure was a trip to a very quiet local crag that I had yet to visit – Craig Rhiwarth in the Tanat Valley. I was generously accompanied by Frank and eventually Phil, but sadly only climbed one route.

Actually it wasn’t really that sad that we only climbed one route, it was simply a case of making the sensible decision to sack it in once we’d discovered that this unloved and rarely frequented little crag was, in fact, mostly a tottering pile of choss and large dolerite blocks held together by mud, cobwebs and brambles.

I may well be doing the place an injustice, as we only paid any real attention to the ‘second crag – lower left’, where the routes of Rose Corner (HVS) and Melangell (VS) were to be found (these were the two I’d had in mind for some reason). We didn’t climb either of these routes though, as after we’d tottered our way up Ivory Tower – (HS 4b with a scary moss-bound unprotected HXS crumbly wall finish – see below), we looked down the final groove of Rose Corner (which is also the finish of Melangell) to see loose shaley flakes, ledges covered in loose rubble, with brambles, grass and a variety of other plants growing from the cracks, along with a slightly scary loose topout, and decided not to bother.

I’m half regretting not doing Melangell as the first part looked lovely, if rather easy (famous last words) – very reminiscent of the final easy pitch of One Step in the Clouds at Tremadog. The second half however, looked decidedly manky, and of course there was the grim looking top groove to reckon with too, which is why I’m not entirely regretting walking away I guess.

So what of the route we did climb? Ivory Tower is one of those routes that looks great from the ground, but when you’re on it suddenly becomes one of those routes that you wish you’d given a miss. There were actually a couple of nice moves up a big layback flake, with lovely grippy dolerite and reasonable gear if you’ve taken some big cams or hexes (I didn’t), it was just a shame that the cracks were full of cobwebs and spiders, and the big blocks in the groove after the flake were hollow and loose and therefore very scary to be climbing around/on/over. Oh and the top out – I’ve already made brief mention of this, but just as you think it’s all over, you find yourself stood on a ledge with a short (2m) vertical wall with a sloping top to climb. “Not to worry!” you might say to yourself, as you take hold of what looks to be a reasonable hold, place your foot on another big reasonable hold and weyhey…bye bye foothold! At this point you may start to wish you could levitate or at least reach the great big bloody tree a few meters to your right, as you look more closely at the holds on this ‘wall’, only to discover it is less of a ‘wall’ and more a stack of rock flakes piled on top of each other and very convincingly doing impressions of a Jenga tower made out of hobnobs and sponge fingers… Mercifully, once you finally commit your life to said hobnob (or sponge finger), you find yourself with an awesome variety of sloping biscuit tops covered in an especially grippy form of moss – perfect to grab onto just as your footholds start to disintegrate.

Anyway, it was a nice day out in the sunshine, the wind only made communication mildly impossible, and I was granted the honour of tripping up on a bramble at the bottom of the descent path and creating a nice jagged gash in my leg. Hence the blood as mentioned in the title.

The crag is in a lovely situation though, with great free parking complete with toilet, a very easy approach and seemingly some potential to be a really nice little venue if only it got more visitors (catch 22 eh?). If the crags received some attention, had a bit of a clean up and perhaps a little gardening, the fantastic immaculate Tremadog style Dolerite would probably yield some mini classics. Hell, I may even go back and do the nice looking little E2 I spied on the way down… 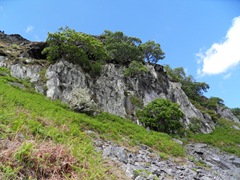 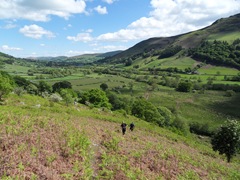 A beautiful location and crag aspect, and best of all, no bank holiday climbing queues…