So, today I decided to break out my baking skills once more in order to produce some hill fodder for the weekend (for anyone who doesn’t know, tomorrow I am walking 20miles of the Offa’s Dyke path as a part of the NEWSAR sweep team, for this I will be requiring cake).

After much deliberation and some random googling, I settled on a sort of toffee apple loaf – basically and apple loaf cake with a ridiculous toffee sauce topping. Yum.

I must admit this is not my own recipe, I used a fabulous one I found on the BBC good food website, I did make a couple of tweaks though.

Anyway, this is it:

First things first – preheat the oven to 160c/gas mark 3. Line a loaf tin with greaseproof paper (you could alternately just use a strip of greaseproof paper along the bottom and ends, and grease the rest of the tin, but I’m lazy so just crumpled the paper into the corners).

Firstly, cream together the butter, sugar and vanilla (making sure the butter is ‘warm’ and not straight out of the fridge really helps reduce the forearm pump).

Beat in the eggs, one at a time – it will look seriously manky when you’re doing this.

Peel, core and then chop the apples into little bitty pieces.

Add the flour, cinnamon, yoghurt, apple and a small handful of pecan nuts, then carefully mix it all together until it resembles a smoothish yellowy paste with lumpy brown and appley bits in (aren’t my descriptions so much better than Delia’s?)

Tip the mixture into your loaf tin and smooth it down so it’s roughly even, then scatter another small handful of pecans over the top. Whack it in the oven!

Leave it to bake for 1hour, then check it to see if it’s done – use a cake tester or some kind of skewer to ‘probe’ the cake – if the skewer comes out clean (i.e. no goopy cake mix on it), then it’s done. Be aware though that you may get little goopy bits of apple with this cake! If it’s not quite done, give it another 5-10 minutes and check it again.

Let the cake cool in the tin for a bit (it will sag otherwise), then when it’s solid enough, remove it from the tin and place on a cooling rack.

Once it is pretty much cool, you get to make the icing/sauce stuff, which is the best bit:

Pour the double cream into a small saucepan and add the toffees (for reference I put 7 in, weighing roughly 60-65g). Slowly heat the pan and keep stirring constantly to make sure the cream doesn’t burn and the toffees don’t stick to the bottom of the pan and burn. Eventually they will melt (trust me, they will, it just takes a little patience) – keep stirring until you have a lovely toffee fluid. Tip this over the top of your cake and then sprinkle yet another loose handful of pecans over the top of the sauce.

Now this one is important – LET IT COOL for at least 10mins before you tuck in, otherwise you will get into a mega mess. 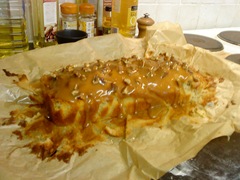