Yep, another wild camp on Dartmoor. This time though, I wasn’t alone, and the mist didn’t feature.

Phil and I headed up onto the Okehampton Range to do a walk up to Yes Tor (highest tor on Dartmoor) and High Willhays (the highest point on Dartmoor, and indeed the highest point in Devon), which are satisfyingly right next to each other. The depressing part of the enterprise, however, was the fact that this particular section of Dartmoor is far from remote or wild – you are only minutes away from some of the Range tracks and indeed some sections of track that seem to be open to public traffic!!

We parked in the village of Belstone and walked up across the range from there, which meant that our walk up took a fair while and was almost entirely on vehicle tracks (apart from the section of bog I decided to take us through in the name of a ‘shortcut’ – served me right when I ended up knee-deep in the mire…). So the walk was rather dull, the area was busy, and the views were frankly rather boring too (ok so I’m spoiled by the mountains – barren moorland simply doesn’t inspire), BUT, that said, we did have a nice time camping near the top of High Willhays once we’d found a suitable spot.

The walk back down was a bit better. Neither of us could face the tedium of returning down the same old Range tracks, and so we headed off down to Dinger Tor and across the moor (on mostly good tracks) up to Oke Tor from where we followed a rather lovely ridge path. Higher Tor and Belstone Tor were also taken in before we headed back down through Nine Stones to the village…and on to a cream tea! 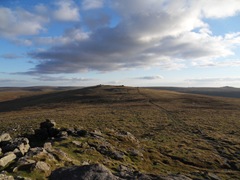 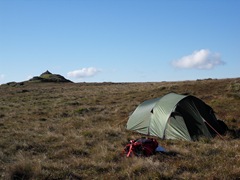 Our camp site, the cairn on High Willhays visible in the background 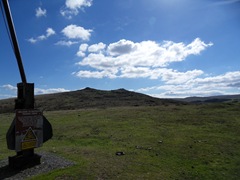 Phil will hopefully now feel a little happier out on the hill with his mates (or even, lord forbid, on his own!) as we spent a good portion of the walk back doing some basic navigation drills, some of which he’d not done before, and all of which were good practice for me. It did all make the dull bits a little more fun too!