Now, I have climbed on sea-cliffs before – Gogarth and Swanage being the main examples, but I can’t say I particularly like it. In fact, I can quite categorically say that I do not like climbing on sea-cliffs. I find the whole experience morbidly terrifying, I really do. I’ve never liked the water (and this stems from a near drowning experience I’d had at the age of 2), and as such, the thought of climbing above a broiling, tumultuous froth of angry ocean, is for me really rather harrowing.

So there’s my excuse. There’s my feeble attempt to explain why I couldn’t scramble down to the cliffs at Sennen and climb back out. Demo Route still has to wait.

Thankfully though, Bosigran isn’t quite the same kind of sea-cliff – you don’t have to downclimb to a sea-washed ledge and then start climbing directly above it. The main face at Bosigran is set back from the actual sea somewhat, and has a nice simple grassy path underneath the crag, although it’s still a little close to the water for real comfort – I still get mesmerised by the violent swirling cauldron of waves below, and the thunderous sound of them colliding with the rocky landmass still makes me uneasy.

Doorpost. This HS 4b is supposedly the route of the crag. Three very different pitches of really rather wonderful granite climbing, up the main section of the cliff.

Oh yeah, I probably haven’t mentioned my hatred of all routes that go sideways have I? There you go, in this one simple blog entry I have just revealed that I’m really rather pathetic as a rock climber – scared of sea-cliffs, and scared of traverses. Great.

Anyway, I led the first two pitches of Doorpost – the traverse and the crux, then seconded the last pitch so Patrick could take photos of my face rather than just my arse again, and actually, I really rather enjoyed it. I’m not sure Chair Ladder will be on the cards for a while yet, and I still don’t know if I’ll ever suck it up and manage to climb at Sennen, but Bosigran is definitely somewhere I’d like to climb again! 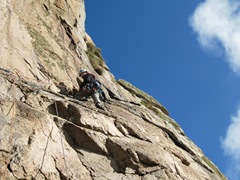 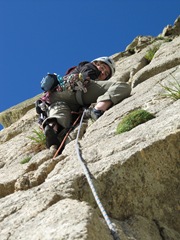 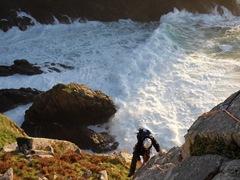 Patrick coming up the classic ‘Alison Rib**’, Diff as an alternative to the walk out!