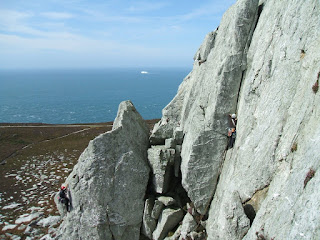 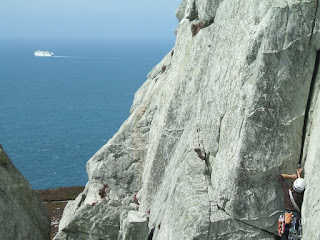 Yes, I am officially cack-handed. Hopefully as I won't be back-dating any more entries after this the ordering will start to make sense - this is actually a post about the weekend before last (i.e. before the Tiger Moth flying)
Climbing. My love, my passion and possibly my obsession. Exhilerating, exciting, fun but also phenomenally frustrating and occasionally really quite dangerous.

Phil and I were in North Wales, by far my favourite place to climb trad. Admittedly I haven't really climbed in all that many places but of those I have, I like North Wales the best.
I'll get my excuses in now, before I even start to explain Sunday's happenings - I really wasn't feeling very well (possibly glandular fever - I've had it for 3 weeks now and it's only just beginning to get better).

Anyway, we met up with Ritchie (aka the self-named rock god) who took us over to Gogarth (Anglesey), Holyhead Mountain to be precise. I had never climbed on Anglesey before so this was a pleasant surprise.
Phil admirably lead an S 4a (can't remember the name) that I actually thought was really quite hard. Maybe it's just my seconding head, I don't know. Anyway we moved on to an HS 4b called 'Pleasant Surprise' that I lead - actually really rather enjoyable, no problems there. Next was a VS 4c called 'Teaser' (see photo). And this is where it all started to go wrong.
I will admit, it wasn't the type of route I would normally have any desire to climb - it had a wide crack that clearly involved my most hated of climbing styles - jamming. So my head wasn't really in the right place to start with.
I won't drag this out, basically I messed up. Big time. Climbed the crux (after much procrastination) and reached a good spike hold, over which I was meant to place a sling. I got muddled, was a bit freaked out and long story short, clipped the sling to myself rather than onto the rope - end result being that when I carried on upwards, my only protection for a few metres came with me. Not good.

So, would I compose myself, climb up and place another piece of gear to protect myself or would I somehow manage to get myself into a position from which I could deck out?
STUPID WOMAN. Going off route due to fear/adrenaline/whatever, finding yourself on a slopey ledge with no viable gear options and being so far above the last piece of protection that a fall would result in almost certain serious bone damage (not even going to contemplate the death potential) is never a good option. Needless to say it all came right in the end and I was ribbed mercilessly.

I need to do more trad mileage and sort my head out. VS is normally cruise level, not struggle and generate death potential level.
Oh well.
Posted by Lauren at 12:10