Friday 29th May 2009, I flew my Qualifying Cross Country – from Halton (EGWN) firstly to a controlled airfield, Gloucestershire (EGBJ), then on to Leicester (EGBG).

So here are a couple of pictures I took on the day – first, my C152 parked at Gloucestershire (picture taken from the beer garden of the bar): 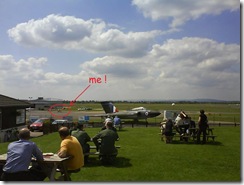 Second, parked on the apron at Leicester: 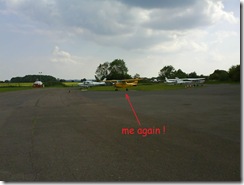 It was a fantastic if extremely tiring day. All told I was flying, on my own, for 3 hours. Now, that may not sound like much, but when you consider the workload involved believe me it is exhausting…

Flying the aeroplane (i.e. just keeping it airborne) isn’t in itself a particularly taxing activity, but flying on a constant calculated heading (whereby you are constantly having to readjust the Direction/Heading Indicator (DI) to read accurately according to the magnetic compass – literally checking and readjusting every couple of minutes), at a constant height (or altitude, depending on the Altimeter setting, which has to be adjusted periodically too), maintaining a constant ground track (which you have pre-calculated to allow for the wind, but which is never exactly accurate) by visually verifying your position and calculating out any adjustments needed to get back onto track, or simply to maintain it (bearing in mind these calculations are all mental and having to be done fairly continuously, whilst you’re doing everything else), and where, incidentally, sometimes it really isn’t that easy to identify specific points on the chart – from above villages all look pretty identical, and roads are really quite numerous, is an entirely different ball game.

Let’s not forget the time management (stopwatch) between each visual waypoint – hitting each one within a few seconds of the calculated leg time is a very important part of the navigation procedure: it is one key aspect of identifying the correct waypoints, as well as providing you with accurate updated ETA’s (either at the next waypoint, but more importantly at the destination airfield), all of which need to be noted down and calculated out at each waypoint, usually after making a turn to a new heading, these ETA’s and leg timings also allow you to make checks on fuel consumption and endurance (although I didn’t do any of these checks en route – I did those on the ground at each field).

Now imagine what it’s like when you’re off track and not completely sure where you are – trying to work out what all those villages are, where those lakes are marked on the chart, or if they are marked at all, all whilst maintaining your heading and height (oh, and your airspeed)…lovely stuff.

You also have to TALK to people, using the correct radio parlance, and listening to them well enough to gain the information you need and also let them know where you are, when you’re going to be somewhere else, how high you are on which pressure setting, and which radio service you actually want – aviation has a very specific radio language system in which you have to pass two exams in order to gain a license to even be allowed to talk to people, so talking on the radio is in itself quite a complex and daunting task - bearing in mind there are a number of ‘absolute no no phrases and wordings’ (go and read about the Tenerife disaster to gain an insight into the importance of accurate radio work). Oh, and it’s not just people at your start and end points you talk to – it is advisable to maintain some kind of contact with someone most of the time, whether it be a Radar service somewhere (like Brize Norton), or an airfield information service (I spoke to people at Oxford, Wellesbourne and Sywell amongst others because I was flying pretty close to them, so by talking to them they, and other aircraft on frequency, knew I was flying in the area and could keep a good lookout), or even the national flight information service (who were incredibly busy when I wanted to chat to them). These en route conversations also provide you with updated altimeter pressure settings – which are vital to maintaining correct terrain separation…

Then, there’s also the process of avoiding other aeroplanes, which, believe it or not, actually gets quite ‘interesting’ when you’re flying over major visual waypoints (everyone uses them!) or flying near/over airfields – at several points I heard myself uttering things like “hmm he’s close”, or “don’t climb, don’t climb, for god’s sake don’t climb – I’m above and behind you on a diverging heading and there’s no way you can see me” (imagine that all in one breath with the increasing panicky tempo that entails), or simply “oh crap, oh crap, oh crap…”.

All pretty mentally exhausting stuff, the level of which ramps up innumerably when you come to try to land at your destination (although at this point you obviously know where you are and as such can leave the navigational stuff alone). Controlled airfields like Gloucestershire have very strict procedures for entering their airspace and joining the circuit – you have to be in constant contact with the controllers and do exactly what they tell you (and this often involves having to re-orientate yourself with regards to the runways and other waypoints). You also must not forget which direction the circuit is running in – you must not turn to the left when the circuit is flying right hand, and you likewise absolutely must not turn right when the circuit is left hand (this is true of all airfields, not just controlled ones), so sometimes the joining procedure may involve some odd spiralling (at very specific procedural heights) to get down to the joining height. Then comes the circuit and actually landing the thing…

Taxiing can be fun if the airfield is complex (“where the hell is taxiway C3?”). And we all know that women can’t reverse park cars, so why would I be any different pushing back a Cessna?

Anyway, it was a fantastic day and an amazing experience, and one that I will remember for a very long time to come. Just the Skills Test to go now!